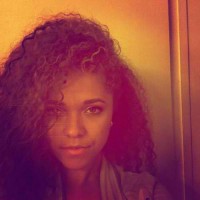 A purebred performer and lover of the arts, hailing from Detroit, MI is also a senior theater major at Columbia College Chicago. She's lived in Chicago for almost five years and considers it her second home. During her tenure at the University, she has been featured in many independent film projects as well as larger television projects such as Oxygen Network's _The Glee Project_ where she was selected top 80 out of 137,000 other contestants to compete for a spot on Fox Network's Emmy award winning television show Glee. She has also been called on to audition for multiple Broadway shows in NYC, including _Book of Mormon_ , _American Idiot_ , and to also workshop a potential Broadway show being produced by Tom Hulce and David Seltzer with musical directors Burt Bacharach and Kyle Riabko. Most recently, she was cast in 7 of 10 hilarious webisodes for _The Onion_ who partnered with YouTube for their own channel.

Aside from acting she has been singing, playing the piano and writing music since the age of eight. She's written songs for herself as well as others. Her music is heavily influenced by jazz, blues, and rock singers of the past, infused with eclectic hip-hop drum patterns. She is currently in the process of writing and recording her first EP which she plans to release later this year. 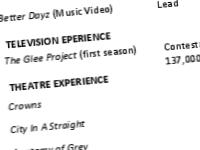