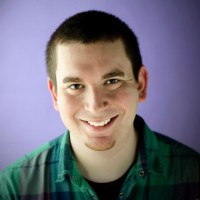 Izaak Levison-Share is a Chicago based editor and a recent graduate from Columbia College, recieving a B.A. in Film & Video with honors. He has been working on film projects since his high school art teacher first introduced him to the craft his sophomore year. He loves the idea of taking different artistic elements and media, and bringing them together to create a whole new piece with a voice all its own.

Izaak strives to adapt his editing style to best serve each project he's working on and celebrate the spirit and integrity of the piece. He especially enjoys mixing sound design and working with music. He has worked on a variety of different projects including music videos, short narratives, documentaries and promotional videos, many of which he was involved in the preproduction and production as well as post.

Izaak's technical know-how includes Final Cut Pro, AVID, Premier, After Effects, Pro Tools and Photoshop and he has worked with film, P2, 5D and R3D footage, from ingest to export. He had originally been pursuing graphic design before he became involved with editing and enjoys the fact that film editing takes working with multiple layers of media to a whole new dimension. During his Senior year at Columbia, Izaak was selected to work as an editor for Columbia College's Advanced Practicum.

Izaak is currently working as a freelance video editor for Pure Imagination, Inc. and has been a contributing video editor for Second City Communications. He is also a collaborator with CelebrateIt.TV, recently releasing the popular music video "All Night, All Right" for Clive Tanaka. Beginning in the fall of 2012, Izaak started editing the independent musical feature film "It's A Terrible Week For Singing" which is slated to tour festivals in 2013. Two short films Izaak edited, "An Honest Life" and "Call Me Crazy," have been successfully making their rounds in the festival circuit with positive responses.